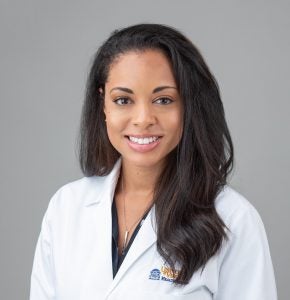 ​As a young girl in Little Africa, South Carolina, Ebony Jade Hilton declared at age 8 that she wanted to become a doctor. From that day on, her mother called her Dr. Hilton. Today, she is a doctor and professor of anesthesiology, the medical director of a consultancy, an award-winning children’s book author, and a lifelong advocate of America’s underserved and marginalized communities.

Throughout her tenure at MUSC, Dr. Hilton’s passions centered on exploring the issue of health disparities, particularly as it pertains to race, and bridging the gap between physicians and the communities they serve. Her works have led to her integration in the medical school curriculum, and have taken her across the globe to participate in numerous medical mission trips via Project Madaktari at Bugando Medical Center in Mwanza, Tanzania.

Now as a practicing physician and associate professor at the University of Virginia – Charlottesville, Dr. Hilton continues to drive change in marginalized populations. As medical director of GOODSTOCK Consulting, LLC,  she works with companies to address local social issues that affect community health, such as education, transportation, food insecurity and housing. She is also a sought-after speaker on subjects related to health disparity and other issues plaguing at-risk communities.

Dr. Hilton’s efforts have been recognized by both the National Medical Association and the National Minority Quality Forum, which named her one of the top 40 under 40 Leaders in Health Care. In addition to pioneering medicine, Dr. Hilton is the author of the Ava series of children’s books, which focus on the power of positive thinking.