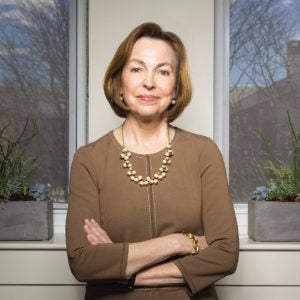 Gloria Larson is a lawyer, public policy expert, Boston business leader and former president of Bentley University. She currently serves as a director on two public company boards, Unum Group and Boston Private, as well as on the board of a private company, reacHIRE. Additionally, she is a member of the boards of several national and regional non-profit organizations including McLean Hospital, the Massachusetts Conference for Women, and the Executive Committee of the Greater Boston Chamber of Commerce.

Larson has received numerous awards and honors throughout her career, including being named to the “Power 50” by the Boston Business Journal and Boston Magazine; listed on The Commonwealth Institute’s roster of the Boston Globe Magazine’s Top 100 Women-led businesses in Massachusetts; and awarded the 2018 Ellen M. Zane Award for Visionary Leadership from Tufts Medical Center. In March 2019, she received a Woman of the Year Award from the Wentworth Institute of Technology. This past spring, Larson was also named one of the University of Virginia School of Law’s 100 Change Agents, recognizing alumni who have made a distinctive impact in the world over the course of the law school’s 200-year history.