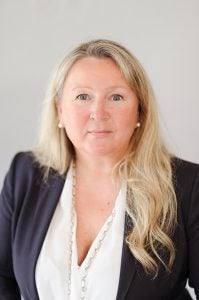 Katarina Fjording is a senior executive and an automotive veteran with more than 30 years of global industrial operations experience from Europe, Asia and America. A mechanical engineer who started in product development, Katarina has held several senior positions within Volvo Cars including Vice President Manufacturing Asia, overseeing the build-up of three plants and leading the manufacturing operations in China. In her most recent assignment, as Vice President Purchasing & Manufacturing Americas, she led the establishment of Volvo Car’s first industrial footprint in America and oversaw the build-up of Volvo Car’s production facility in South Carolina. Katarina is now heading up sustainability and the Volvo Car University in America.

Katarina is a former Board Member of Sunfleet Car Sharing and of the Swedish Chamber of Commerce in China and she previously served as an Executive Board Member of the South Carolina Chamber of Commerce. She currently serves on the Clemson University President’s Advisory Board, on the College of Charleston School of Business Board of Governors, the Cradle to Career Board, the Gibbes museum Board and she is the Vice Chair on the American Red Cross SC Board as well as an Honorary Commander at the Joint Military Base Charleston.

Katarina is an Honorary Doctor of Science with Claflin University, a Manufacturing Institute 2019 STEP Ahead Award Honoree and a Founder’s Award Honoree with the Trident Literacy Association. She was named “20 to Know” by Post and Courier’s NOLO Magazine in 2017, and “50 Most Influential People of 2017” by Charleston Business Magazine. Katarina loves the outdoors and is an avid sail racer and hunter. She is passionate about the ocean and marine biology and has vacationed on expedition ships in the Arctic and Antarctica.