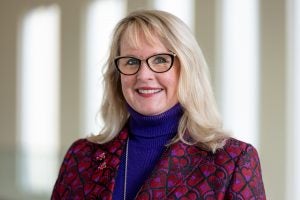 Lou Kennedy is CEO and Owner of Nephron Pharmaceuticals Corporation – a certified woman-owned business. She has held a variety of marketing and operational roles at Nephron and created the Nephron national sales force.

Kennedy has been widely recognized for her achievements in business and leadership. As a worldwide pandemic reached South Carolina, Governor Henry McMaster appointed Kennedy to #acceleratesc – the state’s coordinated COVID-19 advisory and recovery team.

The South Carolina Chamber of Commerce celebrated Kennedy as its 2020 Business Leader of the Year. She has won Ernst & Young’s Entrepreneur of the Year Regional Award, and an Outstanding Leadership Award from the National Association of Manufacturers (NAM) at the NAM Institute STEP Ahead Women’s event. Nephron won an honorable mention award for Global Facility of the Year in 2017 from the International Society for Pharmaceutical Engineering (ISPE). The award hailed Nephron’s innovation and automation. Kennedy, who has served as member of the judge’s panel for the global facility of the year award, joined the ISPE board of directors in 2019 and served until 2022.

Kennedy received South Carolina’s highest civilian honor – the Order of the Palmetto – from Governor Nikki Haley in recognition of a lifetime of outstanding service. She earned a Bachelor of Arts degree in public relations from the University of South Carolina.