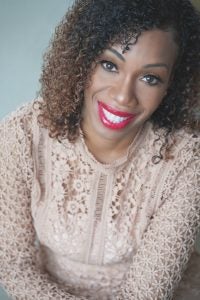 Monique Wilsondebriano has been called a “Woman of Distinction” and “The Epitome of the American Dream.” She is one half of the power couple behind the nationally-acclaimed Charleston Gourmet Burger Company. Monique has taken her motto of “be so good that they can’t ignore you” to unbelievable heights.

Monique’s love affair with food began as a child in Neptune, NJ inside her grandparents’ kitchen. She would often pretend to be her grandfather’s assistant while he prepped food for the large family gatherings they often had. Monique began taking culinary classes in junior high school and perfecting her craft. To make extra money, Monique would sell homemade chocolate candies and cookies to her friends.

An entrepreneur as long as she can remember, Monique left a promising career in retail management for Target and Lowe’s Corporations to launch several successful business ventures including a children’s personalized book company and fine clothing line. Her products have been sold across the United States and internationally as far as the Middle East and Asia.

Fed up by unhealthy products offered on the market, Monique combined her passion for food with her eye for a profitable business opportunity. This led her to professionally bottling a backyard burger seasoning mixture created by herself and her husband.

Fueled by her passion to give back, Monique dedicates time to mentor other entrepreneurs and serves as a role model to young adults. Monique believes that encouragement to reach one’s full potential is insufficient without the knowledge of how to do it. Her mission is to provide the knowledge necessary for anyone to achieve their dreams.