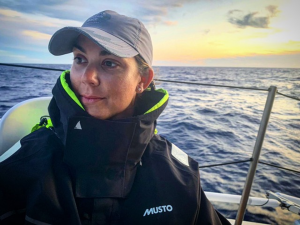 Sara Hastreiter grew up in the great state of Wyoming. She received her undergraduate degree from the University of Wyoming and is a current resident in Jackson Hole. For the past 12 years Sara has lived, worked and travelled to over 55 countries as a professional ocean racer, climber and humanitarian. After a recent loss of her ocean racing Olympic campaign, Sara pivoted to working on her graduate degree and is currently studying Industrial Organizational Psychology at Harvard.

In parallel with her ocean racing career, Sara has spent the past four years working on a World First Record, to be the first female and only the second person to sail the seven oceans and climb the highest peak on each continent. After having sailed every ocean, Sara has climbed three of the seven summits, narrowly missing the summit of Denali last year, turning around at 19,000’ due to a lung infection.

Sara recently won the 2020 Rocky Mountain Athlete of the Year, was featured in the documentary ‘No Ordinary Women,’ is a World Speed record holder with her all-female teammates, Team SCA, in the Volvo Ocean Race and has been featured in high profile publications in the U.S. and around the world.

After having sailed the equivalent of six laps of the planet, Sara’s current ambitions include focusing on her graduate studies, her continued humanitarian collaborations, finding partnership to finish her monumental seven seas, seven summits world record attempt, and continuing to share her journey to inspire the next generation.